Anyone who's met me or read my ramblings online knows I'm a devoted fan of horse racing. I love the excitement of a good race, of course, but I love the history and the pedigrees and the personalities as well. That's what drew me to Medaglia D'oro in 2002. He is a son of El Prado who himself is by Sadler's Wells, one of the greatest sires of the last century (and one of my favorites). Most horses of the Sadler's Wells line race on turf in Europe, and to see one running on the dirt in the USA was a bit of a novelty. MDO was not a great racehorse. He ran second almost as much as he won, but he was a really good race horse who proved his class against a number of tough and talented rivals. He faced some of the best older runners I've seen and acquited himself well.

MDO was a bit of a late bloomer, starting only once as a 2 year-old. Though he was somewhat inexperienced, he earned a spot in the 2002 Kentucky Derby and closed gamely despite traffic to run fourth. He finished off the board in the Preakness, and then came roaring back to challenge Sarava all the way down the long stretch at Belmont. He finished second, but sometimes that really endears a horse to a girl, especially when you can tell he's running his heart out.

MDO went on to win the Jim Dandy and Travers at Saratoga, winning the Travers gamely over a dogged Repent in the mud and rain. His seconditis caught up with him in the Woodward and again in the Breeders Cup at Arlington where he (and the rest of the field) were stunned by upset winner Volponi.

As a four year-old, he won the G1 Whitney as well as the storied G2 Strub. In the G1 Pacific Classic, he met up with the Argentine champion Candy Ride who put on the performance of his life, winning in a new track record of 1:59.11. MDO was a game second 3.25 lengths behind, meaning he too ran a sub-2:00 mile and a quarter, the sign of a really stellar horse in my book. The 2003 Breeders Cup Classic looked like it would be MDO's, but after dueling the talented Congaree much of the way, he was caught in the final sixteenth by Pleasantly Perfect.

At five, he returned to the track in prime form, romping in a hand ride in the G1 Donn by open lengths in a quick 1:47.68, and beating 2003 KY Derby winner Funny Cide in the process. He then was flown to Dubai for the $5 million Dubai World Cup where he faced Pleasantly Perfect once again. It was probably his best performance ever even though he was beaten. It took everything Pleasantly Perfect had to get by MDO, and the smaller horse kept coming at him all down the stretch, finally finishing half a length behind.

That race ended up being his last (he wasn't injured, but the trip to and from Dubai takes alot out of a horse). He was retired to stud at Stonewall Farm, and I was thrilled to visit him in July 2006. He was just being brought in from the pasture for the hot afternoon when I arrived, and I will never forget the presence this horse has. He was snorty, full of himself, dancing on his toes, but a gentleman, too. He knew he was being admired, and he surely is one of the handsomest stallions I've seen. After my visit, I wrote in my journal that he was "a fabulous piece of horseflesh, and oh so beautiful. I want to buy a mare to send to him---if his foals look as good and run even half as well as he does/did, he'll be a top sire." Nobody knew then that a filly of his born a few months earlier was going to set the racing world on fire in a few years, making him the hottest sire in the country.

Because of Rachel Alexandra's success on the track, as well as that of MDO's other talented daughters (he has quite a number of them), he was sold to Darley this past summer, the American branch of the Godolphin racing empire. My most favorite mare, Ipi Tombe, happens to be carrying a foal by MDO and is due very soon.

So how does this long-winded post relate to model horses? Being the fan girl that I am, I painted a portrait of MDO in March 2005 and showed him at GLC here in Chicago. He won Reserve Champ CM Light/Sport Breed and though I had to sell him, he has continued his winning ways in the show ring, including a Top Ten in CM TBs at NAN in 2008. I spied him for sale on MH$P (link) this morning and thought I would pass along the link. I'm half-tempted to buy him back myself. I still think he's one of the nicest bays I've ever painted.

CM Esprit is now on ebay!

Two posts in as many days! Must be a new record for me. :D 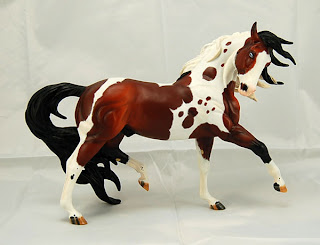 Posted by Kirsten Wellman at 9:44 PM No comments:

The new Breyer Esprit model is a wonderful, dynamically posed horse that looks like it will lend itself well to any number of colors. I had not intended to paint my first one bay tobiano, but I just couldn't resist. 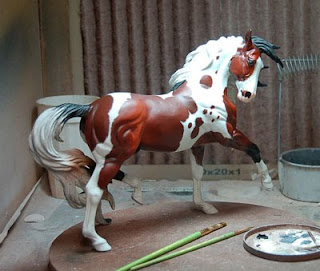 I am hoping to have this guy finished up by tomorrow evening to list in ebay. I need to sell him to buy more Esprits! :D
Posted by Kirsten Wellman at 8:43 PM No comments: