Doh! A deer! A broken deer!

As an artist, by necessity, I've learned to do some basic restorations---fixing broken eartips, touching up scratches and rubs, filling cracked legs, etc. In particular, I specialize in restoring Breyer woodgrains. Generally speaking, I try to buy mint pieces for my collection, but sometimes you find things you can't help but want to rescue. This poor Hagen-Renaker DW Patience had a bit of an accident (prior to my acquiring her). And as an avid collector of HRs, especially the wildlife, I had to try my hand at restoring her. 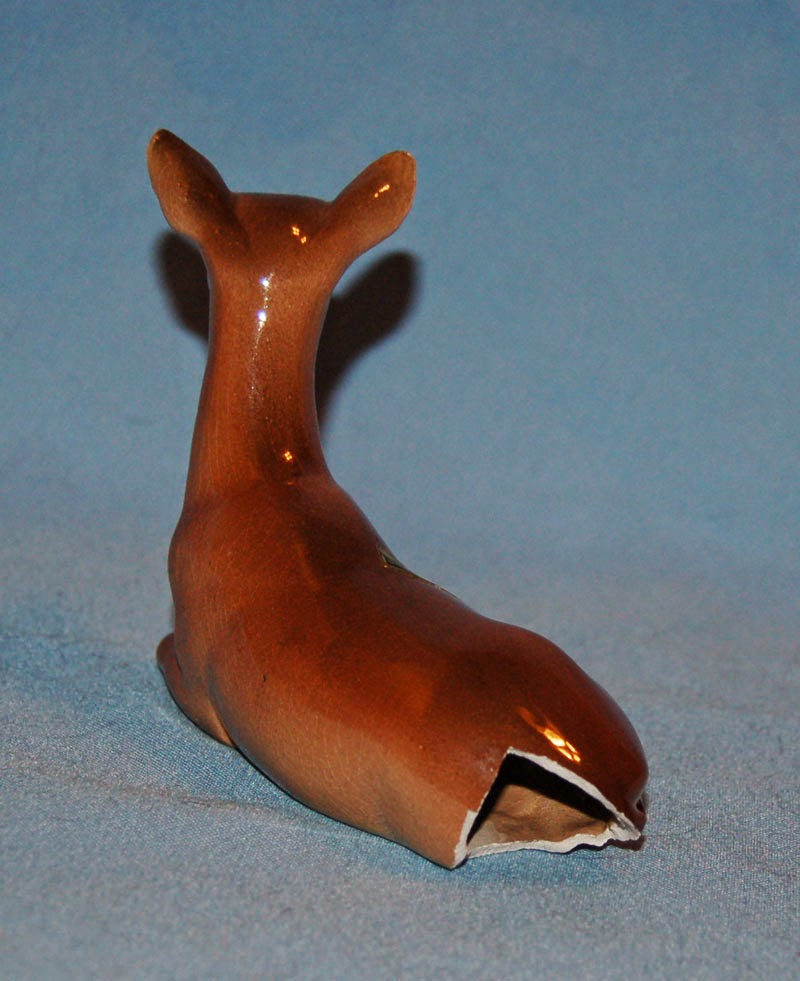 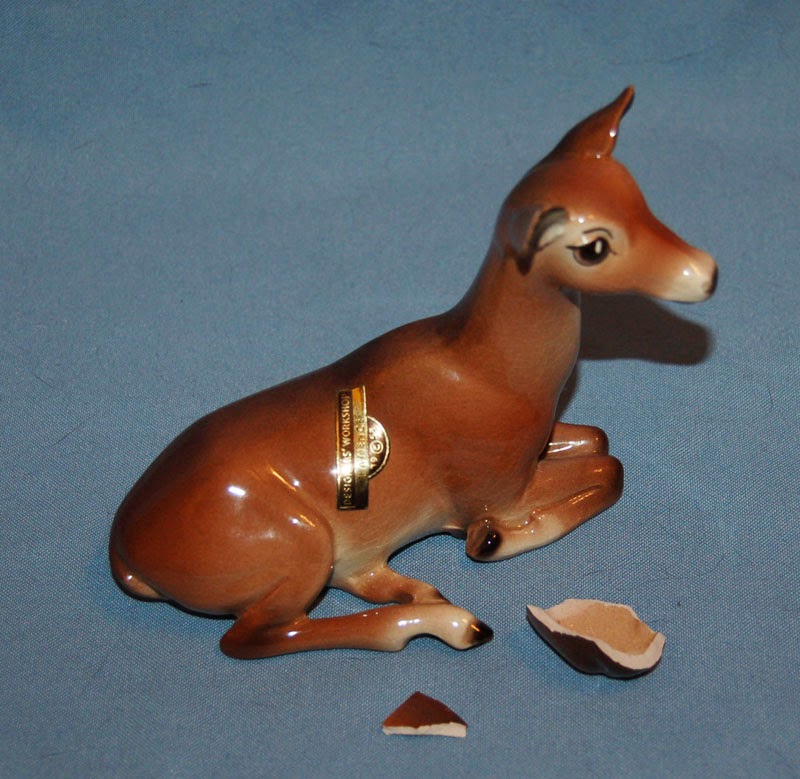 Happily, the breaks were pretty clean, and with a little gentle sanding of the edges (to make them fit back together again) and some water soluble glue, she was easy to restore to one piece. 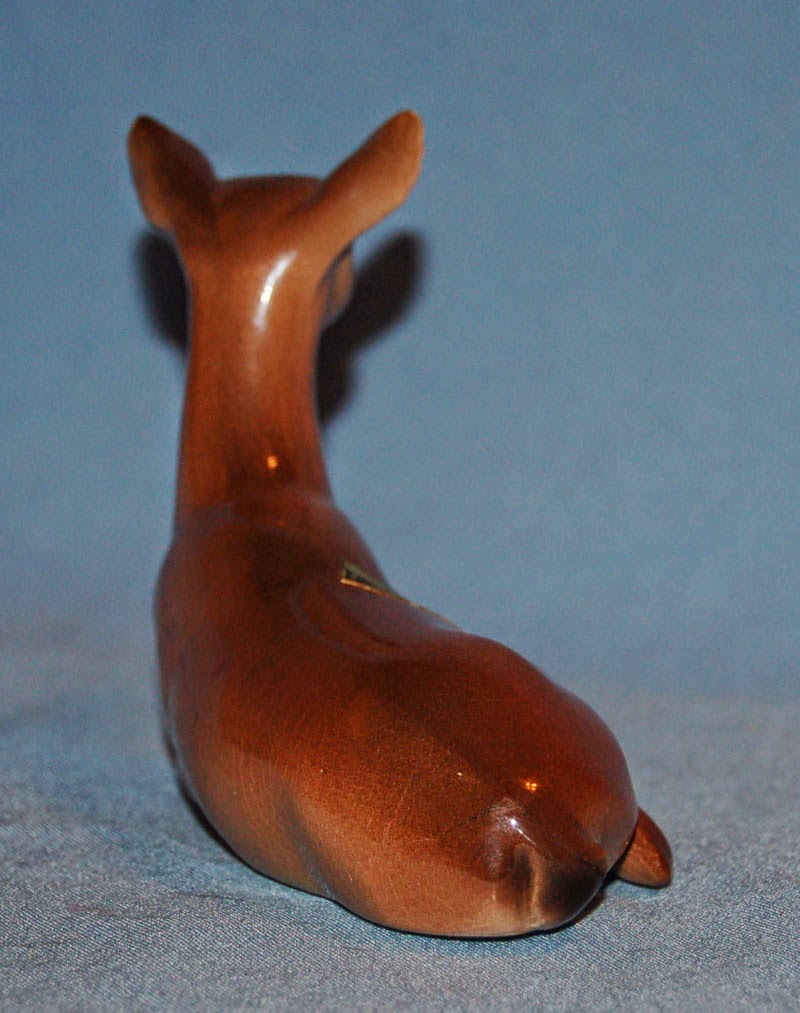 With a little touch up of the edges, she's good as new. 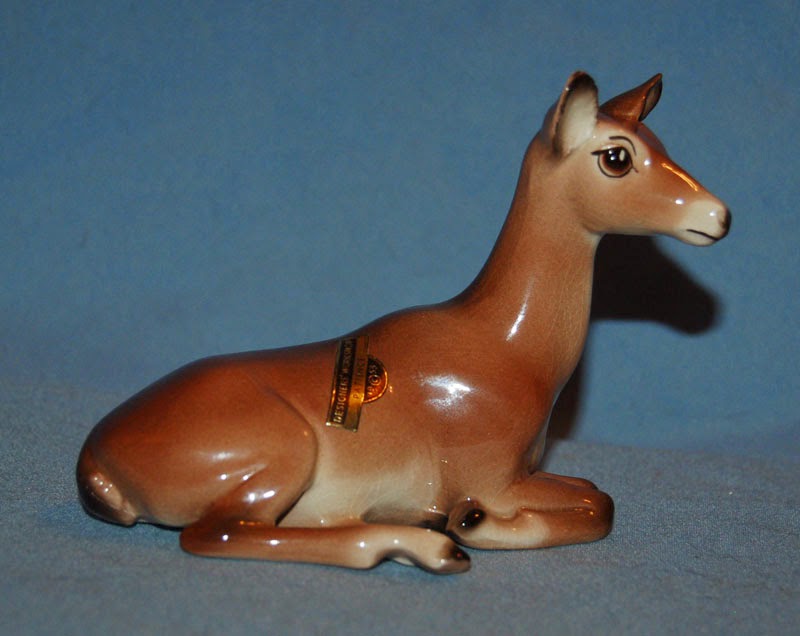 The racing gods are often a cruel and capricious lot, and while I've cursed them often in the past, in hindsight, perhaps, just maybe, all of the anguish and frustration of the last 37 years has been for the best. Most of the 13 horses who tried and failed to win the Triple Crown since Affirmed in 1978 went on to have decent if not especially noteworthy careers (Spectacular Bid being the wildly talented exception). In light of what American Pharoah has done this year, would any of them really have been worthy to wear the crown? Maybe, maybe not. The racing gods dole out tastes of greatness stingily to give us perspective, to keep us from becoming jaded and blasé, to keep the Triple Crown something that is rare and extraordinary---to be sure we recognize true greatness when it glides past us, ears pricked, vanquished foes left dazed and far behind.
Fairytale endings are rare in this sport, but a week ago before a crowd of more than 50,000 people, we got one. American Pharoah, making the last start of his career, raced once more into the history books with a dazzling romp in the Breeders Cup Classic. He led from wire to wire, ears pricked, and was never seriously challenged. At the top of the stretch, jockey Victor Espinoza turned him loose, and Pharoah coasted to an easy 6.5 length lead, passing the wire in a sharp 2:00.07, and shaving five seconds off Keeneland's previous track record for 10 furlongs on any surface. He will be forever remembered as the horse who ended the 37-year Triple Crown drought and the immortal who claimed what is now being called horse racing's "Grand Slam," the Triple Crown plus the Classic.

Over the last week, I've struggled to find the right words to sum up Pharoah's incredible performance and career for this blog, and I have been struck all over again by how different this horse has been from others who have gone before him in the quest for racing immortality. In the years leading up to Pharoah's Triple Crown victory, as the wait grew longer and longer, I opined on more than one occasion that it wouldn't necessarily take a great horse to win the Triple Crown, just a lucky one. All we needed was one horse who was a stand-out in a crop of mediocre three year-olds, one who had just enough extra talent to get the job done. But I was wrong. It does take a great horse to win the Triple Crown, and American Pharoah has driven home this point emphatically all year long. It takes luck, yes, but it also takes soundness of body and mind, stamina, incredible fitness, great heart, a willing spirit, and that little something extra that sets a great horse apart from his contemporaries.

American Pharoah possesses all of these qualities. Looking back now on his exploits of the last fifteen months, it is awe-inspiring to see how he seemed to thrive despite his grueling schedule. He improved with nearly every start, winning regularly by daylight even though Espinoza usually wrapped up on him in the last sixteenth of a mile. His times got faster with every race, culminating in his scintillating Breeders Cup performance. He also displayed remarkable physical resilience all year long. He crossed the country 14 times, traveled more than 28,000 miles, raced at 7 different tracks, and never once put a foot wrong. He has a beautiful, fluid, ground-eating stride that allows him to effortlessly glide over the ground and that supposedly measures two feet longer than Secretariat's. It may be the secret of his ability to run on any surface at any track, from dirt to polytrack to a sea of mud.

Pharoah's contemporaries by comparison have not fared nearly as well. Brilliant speed-horse Dortmund was laid up most of the summer with an injury after the Preakness; Firing Line was put on the shelf for the rest of the year after failing to fire in the mud at Pimlico; perpetual bridesmaid Frosted eked out a win in the Pennsylvania Derby after challenging Pharoah in the Travers and wilting before that colt's gritty determination (and was never even a factor in the Classic); Keen Ice, who managed to pull the upset in the Travers and whose trainer boasted that he would do the same in the Classic, finished some 13 lengths behind a fresh Pharoah despite also having been rested since the Travers.

One of Pharoah's greatest strengths I think is his good mind, easy-going demeanor, and kindness of spirit. Pharoah by all accounts is a smart, friendly horse who thrives on attention. He has been utterly unfazed by the throngs of press and fans who have come to visit him, something few racehorses have the temperament to handle. Baffert has allowed unprecedented access to the horse because of his good nature, and Pharoah has taken it all in stride as if it were his due. Which it is.

Traditionally, the final test of a great three year-old has been the ability to defeat older horses. Of the three Triple Crown winners in the 1970s, only Secretariat was able to do so. And though the Classic field this year was small, it was one of the deepest in a number of years. Six of the seven horses who faced Pharoah were G1 winners: Honor Code (Whitney and Metropolitan Handicaps), Tonalist (2014 Belmont Stakes and Jockey Club Gold Cup twice), Hard Aces (Santa Anita (formerly Hollywood) Gold Cup), Keen Ice (Travers), Frosted (Wood Memorial), and Gleneagles (2000 Guineas, Irish 2000 Guineas, St. James Palace, National Stakes, and Prix Jean-Luc Lagardere). American Pharoah made this quality group of horses look like claimers as he bounded away to an easy victory, ears pricked all the way.

He won 6 G1 races all told as a three year-old, including 5 races with purses of a million dollars or more consecutively, something no other horse his age has done. Of the four Triple Crown winners since races became graded in the early 1970s, he is the only one to win more than one G1 race after the Belmont. He retired as the fourth richest American horse in history with earnings of $8,650,300. Had Visa not cancelled their $5 million Triple Crown bonus several years ago, he would have retired as the richest American racehorse of all time.

But all numbers aside, even as impressive as the statistics are, there are more ephemeral qualities that some great horses possess. Like so many Thoroughbreds, Pharoah ran for the sheer exhilaration of running. In nearly every race, his ears were pricked observantly, listening to the roar of the crowd and the rush of the wind as he sliced through it. I have never seen anything quite like it in my 30+ years following the sport. As I've mentioned in the past, I learned to read from C. W. Anderson's horse stories, and I think he would agree that American Pharoah has the "look of eagles," that quality in great horses of heightened awareness and of seeing something in the distance just beyond the sight of mere mortals. 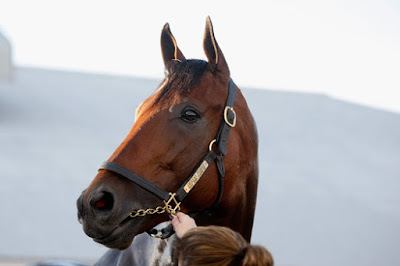 As Bob Baffert so aptly put it in the latest issue of the Blood-Horse, Pharoah is a throwback to the hickory-tough horses of bygone ages. He proved himself to be fast, determined, versatile, sound, and above all, worthy of that elite company he joined at Belmont Park. He is the horse of a lifetime.
Posted by Kirsten Wellman at 8:51 PM No comments: