Work has been beyond insane for the last 6 weeks or so, giving me much less internet time than usual. But I have managed to give my website a much needed overhaul at last, and while I don't code anything fancier than basic HTML, I think it's an improvement. The Gallery is now organized by color rather than breed (which in retrospect makes so much more sense):

I also have updated my Progress page of current commissions. I had hoped to have everything done by the end of October, but I was under the weather for a bit as well as overwhelmed by the real job, so I'm going to have to push my goal out to the end of the year.

My books are open for new commissions if anyone is interested.

I am also willing to offer very generous trade credit for anything on my want list (especially any Sarah M-B resins or a glossy Rachel Alexandra).

I hope those of you who watched the Breeders Cup enjoyed it! I was thrilled to see Goldikova make history by becoming the first horse to win three Breeders Cup races. She has cemented her place in history beside Brigadier Gerard as one of the best, if not the best, milers of all time. Her groom's reaction as she roared down the stretch to victory is one of the neatest BC moments I've ever seen. Serious warm fuzzies, let me tell ya. :)

I know many people were sad to see Zenyatta's unbeaten streak broken in the Classic, but she put in such a game effort that I was more impressed by her loss than any of her wins. It's kind of mind-blowing to think that these last 2 years have brought us 3 of the most talented mares I've ever seen---Rachel Alexandra, the fastest filly since Ruffian; Zenyatta, the most consistent since Personal Ensign; and Goldikova, who utterly defies description. I feel so incredibly lucky to be alive to see these goddesses of the turf.
Posted by Kirsten Wellman at 8:35 AM No comments:

I've been so busy working on commissions that I haven't had anytime to blog. But I have had a few spare moments to complete a sales piece in between orders, too. :) 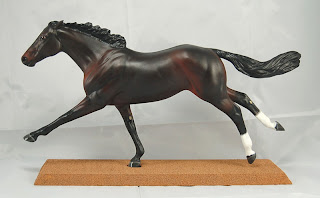 Thanks for looking! :)
Posted by Kirsten Wellman at 8:52 PM No comments: