One hundred years ago today, a true legend was born. Even now, after a century has passed, he remains the benchmark against which all great horses are measured. Few have come close and none have been his equal. The simple notation below in the Nursery Stud foaling ledger gives no hint of what was to come. And how could it? Who would dare dream up such a horse, such a career, such a legacy? Who would believe it if it hadn't really happened? And yet it did, and the echoes of his greatness still ring down the years despite a world very much changed since 1917.

Mahubah's chestnut colt by Fair Play was of course Man O' War, the greatest Thoroughbred to ever grace the track. I have blogged about him and the models made in his likeness on my collectibility blog in the past, but as today is his 100th birthday, and as he is the source of my lifelong passion for horse racing, I thought I would write a bit about him here, too.

My earliest recollections of horse racing are of my dad reading C. W. Anderson's horse stories to me. Anderson wrote about Man O' War with the greatest reverence, and when I was old enough to read myself, I devoured every horse book I could find to learn more. 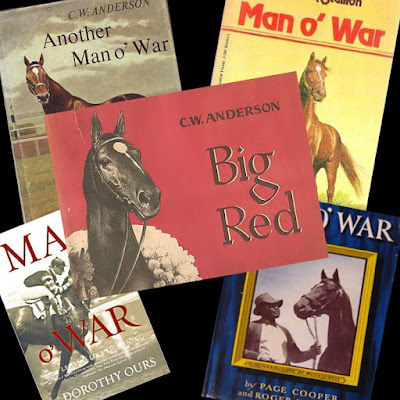 My love of horse racing was thus formed early on, and I have collected a number of books, art, figurines, locks of mane and tail, win tickets, race programs, and other bits of racing memorabilia over the years. My Man O' War memorabilia collection is small (if you don't count the books), but here are some of my favorite pieces.

I have made a few pilgrimages over the years to places where the great horse once stood at stud, like Faraway Farm where his sire and dam are buried. (Apologies for the poor film quality.)

Man O' War Farm just down the road from Faraway was also the site of MOW's original burial. 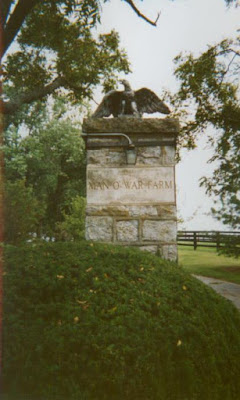 And his stall at MOW Farm where mares are still foaled out in hopes of a bit of extra talent and good luck. 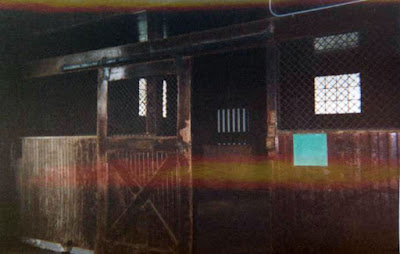 Fortunately, my family settled within relatively easy driving distance of Lexington, KY, so I've been able to make the trek to BreyerFest every year since it began in 1990. A visit to Man O' War's current burial place at the Kentucky Horse Park to pay my respects is a yearly tradition. He rests under a larger than life bronze by Herbert Haseltine near the entrance of the park. A shady avenue leads to the monument from the visitors' center. 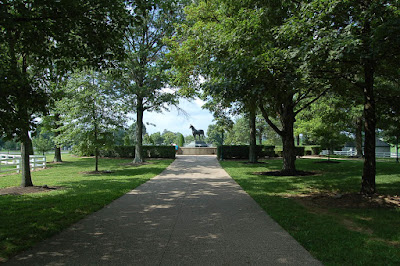 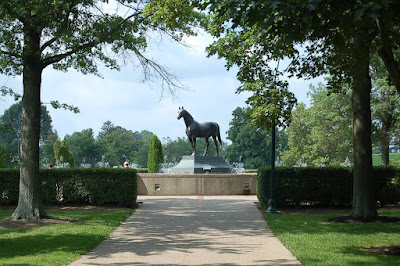 Several of Man O' War's offspring are buried there as well, including his two most influential sons, War Admiral and War Relic. Man O' War's sire line has become a bit rare these days, surviving primarily through his great-great-great-great-grandson Tiznow. Interestingly, Man O' War's sire line is also just about the last of the Godolphin Arabian's tail male line. I worry that it may fizzle as the Byerley Turk's line seems to be doing, but the tail male line is really only part of the picture. Man O' War's daughters were phenomenal broodmares, as were the daughters of some of his best sons. The blood of War Admiral, War Relic, Intent, In Reality, Salaminia, American Flag, Wavy Navy, and others flows in the veins of many modern champions like American Pharoah, Arrogate, California Chrome, Rachel Alexandra, Zenyatta, Ghostzapper, Point Given, and so many others.

We have been blessed in the last few years with some incredibly talented horses---a Triple Crown winner at last!---and with every new crop of foals, hope springs eternal. It always puts me in mind of the last few stanzas of J. A. Estes' poem "Big Red."

"A foal is born at midnight
And in the frosty morn
The horseman eyes him fondly,
And a secret hope is born.
“But breathe it not, nor whisper,
For fear of a neighbor's scorn;
He's a chestnut colt, and he's got a star;
He may be another Man O' War.
Nay, say it aloud; be shameless.
Dream and hope and yearn,
For there's never a man among you
But waits for his return."