After the 2018 Triple Crown hero Justify retired to stud last July, I knew that my sister Sarah and I had to plan a trip to Kentucky to see not just one, but two Triple Crown winners. Who could have predicted that after a 37 wait, we'd have another Triple Crown winner again so soon? Both American Pharoah and Justify stand at Coolmore's American farm, Ashford Stud, and as both stallions shuttle to Australia starting in June, we arranged a visit for the weekend after the Kentucky Derby.

I flew to Atlanta to meet up with Sarah on that Wednesday afternoon, and we spent the evening hanging out with our parents and ogling some of the neat models Mom and Sarah have liberated at estate sales lately. (I'll write a blog about these guys soon.)

On Thursday, Sarah and I got up early and had breakfast al fresco with her cat, Zipper, before hitting the road to Lexington. 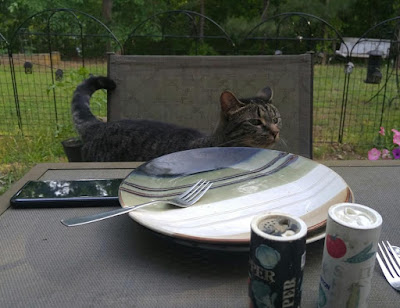 We had no set schedule for the day, so we stopped and checked out antique malls along the way. We didn't find anything, but the sunset at the end of the day was pretty stunning. 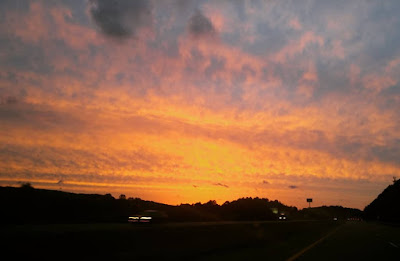 Our tour at Ashford on Friday wasn't until 3:00pm, so we decided to spend the morning visiting some old friends at, well, Old Friends. 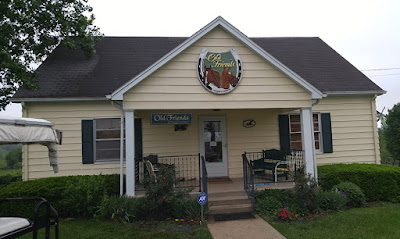 Buddy the official greeting cat came out to welcome us and get some love. 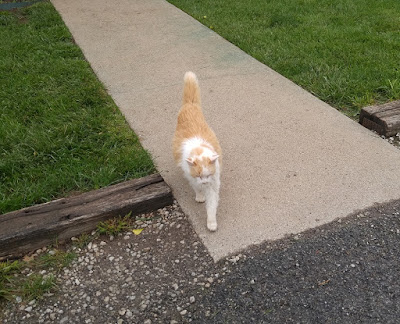 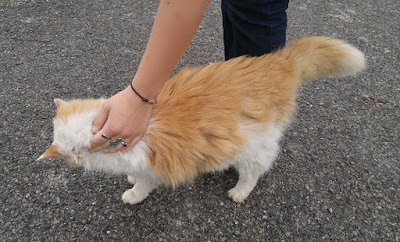 The tour started inside the gift shop and welcome center with a video about the farm, its residents, and its mission. Old Friends is a retirement home for Thoroughbreds whose racing and/or breeding careers are over. The farm offers tours to visit some of the more famous residents which raises funds to rescue a number of lesser known horses. After the video, we all headed back outside for our walking tour. 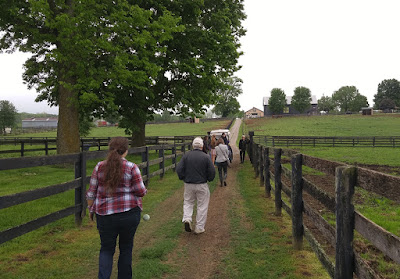 Our first stop was to see Sarava, winner of the 2002 Belmont Stakes. At 70-1, he was the biggest upset winner in the history of the race. 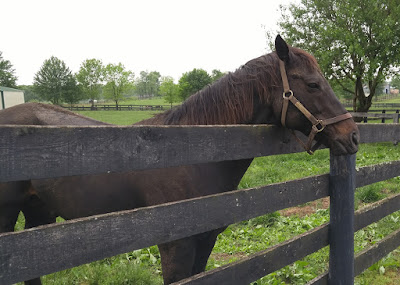 Across from Sarava was Nicanor, one of Barbaro's full brothers. Though his racing career started off promisingly with a 15 length score in a turf maiden race, Nicanor was not particularly successful as a racehorse or as a stallion. But he more than makes up for it in terms of looks and personality. If we could have smuggled him home with us, we would have. He is such a sweet, friendly boy.

One of the best things about Old Friends is that visitors are encouraged to pet and feed carrots to most of the horses.
Next, we got to meet Rapid Redux, the tough gelding who holds the American record for most consecutive wins. Though his record of 22 victories in a row has been eclipsed by horses elsewhere in the world (Black Caviar and Winx), it has yet to be equaled here.

Rapid Redux didn't seem to care about his impressive record though. He was mostly concerned that his Breeders Cup Sprint winning pasture mate, Amazombie, didn't hog all of the carrots.

Across the lane from Rapid Redux and Amazombie were Little Mike and Game on Dude. Little Mike won several prestigious G1 turf races including the Arlington Million and the Breeders Cup Turf in 2012. Game On Dude won a number of G1 dirt races in his career including the Santa Anita Handicap a record three times. Mike and Dude were very polite about their carrot intake.

From there, we headed up a hill toward one of the barns. In a pasture behind it was the horse I most wanted to see, War Emblem. Despite being a racing fan all of my life, I didn't get to attend the races until I moved to Chicago for grad school. In 2002, I went to my very first race, the Illinois Derby at the now demolished Sportsman's Park. War Emblem won that day in a runaway performance before going on to win the Kentucky Derby and the Preakness. He was sent to stud in Japan in hopes that he would become a replacement for the late, great Sunday Silence, but it was not meant to be. War Emblem had no interest in breeding and sired only 119 foals in ten years at stud. He was returned to the United States and now lives out his days at Old Friends. He's not the friendliest horse, so we were not allowed to get close, and he wasn't particularly interested in visiting anyway. But it was really wonderful to see the old curmudgeon again.

We continued on into the barn which housed some of the more socially inclined horses including an old favorite of mine, Alphabet Soup. I saw him years ago when he stood at Adena Springs, and it was a pleasure to get to pet him and feed him carrots. Soup's biggest claim to fame was winning the 1996 Breeders Cup Classic in which he upset the mighty Cigar.

Alphabet Soup shares his stall with this adorable little donkey. 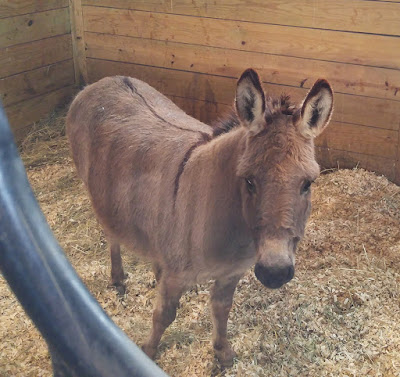 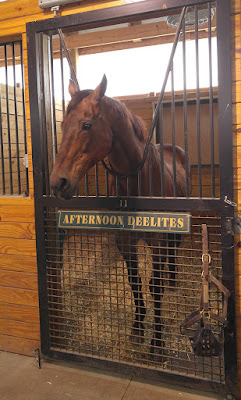 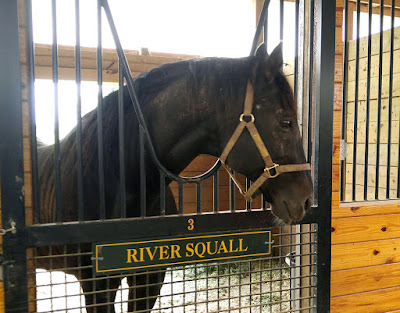 ...and the farm's newest resident, Einstein. A Brazilian-bred son of the Kentucky Derby winner Spend A Buck, Einstein won G1 stakes on dirt and turf before retiring to stud. He's another one I would have happily taken home as a pocket pony. 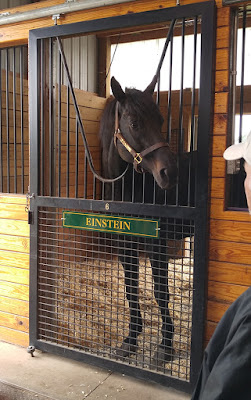 The smallest resident in the barn, Little Silver Charm, was also the loudest. He is the farm's official spokeshorse, and he was very insistent that he receive his due in the form of carrots. So much so that the vet has ordered him on a diet (which he is not happy about).

We headed out to far end of the barn, stopping briefly to feed carrots to Z Dager, one of the first horses raced by the Zayat family (of American Pharoah fame).

And then it was on to see the farm's biggest celebrity, Silver Charm. In 1997, his rivalry with Free House was the talk of the Triple Crown trail. Silver Charm narrowly defeated Free House in both the Kentucky Derby and the Preakness, and the two battled head and head again in the Belmont. Silver Charm finally prevailed only to be caught in the final strides by Touch Gold (who also happens to be an Old Friends retiree). Silver Charm won the Dubai World Cup the following year and was eventually retired to stud at Three Chimneys where both Sarah and I visited him in 2003. Two years later, he was sent to Japan for stud duties with the understanding that he'd be returned to the United States when his breeding career was over. In 2014, he came home and is thriving at the age of twenty-five. When we visited, he was recovering from oral surgery and had just been cleared to eat shredded carrots again. We were delighted to be able to spoil him. 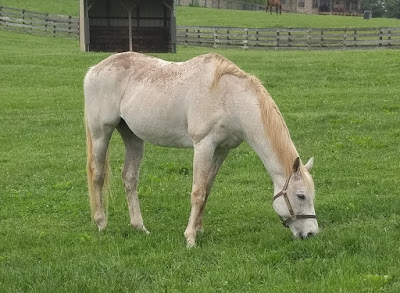 In the next paddock, we met Special Ring, a turf runner who began his career in France before finding success in California.

He shares his paddock with Popcorn Deelites, a son of Afternoon Deelites. Popcorn raced mainly in claiming races and allowances, but he found lasting fame in the movies. Pop is one of eight horses who played Seabiscuit in the popular movie of the same name. In particular, he was used in scenes breaking from the gate and as the horse playing Seabiscuit in the scene where he defeats War Admiral in their match race. He was also ridiculously friendly and sweet.

Just down the road from Silver Charm is the horse that denied him the Triple Crown, Touch Gold. He's another one who's a bit too salty to be allowed near visitors, so we admired his bad attitude from a distance. Our fantastic tour guide Lisa gave him some carrots to appease him.

We then headed back toward the welcome center, stopping to feed treats to Eye of the Tiger, a nice stakes winner who recently retired from stud duties.

We also gave some love to Sun King, Charismatic's most successful son. Though he had a tendency to run second, he still won more than $2 million.


The road back took us past the other side of Nicanor's paddock. He wanted more carrots.

There are two equine cemeteries at Old Friends---a large one near the back of the farm where most of the residents are eventually laid to rest, and a smaller one near the front of the farm for a few very special horses. Charismatic, who died at Old Friends, is interred there along with several horses who died elsewhere. The remains of the mighty Skip Away were moved to Old Friends when his original resting place, Hopewell Farm, was sold at auction. The headstone for Springsteel, a tough campaigner in the 1930s, was moved from Rockingham Park before the land was developed. Similarly, when the California ranch where champion handicapper Noor died was sold to developers, his remains were disinterred and sent to Old Friends. (Noor is famous for having defeated two Triple Crown winners, Citation and Assault.)

Sarah and I both agreed that Old Friends was one of the most fun horse farm tours we'd ever been on. It really was a treat to be able to feed and pet so many famous horses all in the span of an hour and a half. And our tour guide Lisa was so welcoming and enthusiastic. If you haven't been to Old Friends yet, definitely go. You won't regret it! 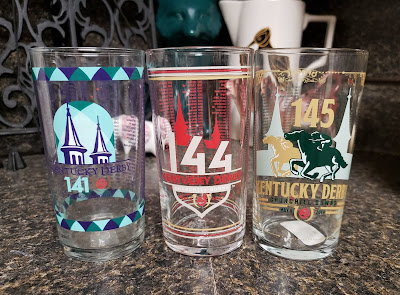 After Old Friends, we had a late brunch and hit a few antique stores before heading to Ashford.The only things we liberated were some Derby glasses. Next time, on to Ashford to see the champs (and more old friends)!

Posted by Kirsten Wellman at 1:52 PM

Hey Kirsten, lovely post! I enjoyed the cat shots as much as the horses!